New Haven diner Dreadnought was one of two "Deluxe" diners built in 1930 by the Pullman Standard Car & Manufacturing Company for the New Haven's luxury extra fare all parlor car New York/Boston train the "Yankee Clipper". All cars assigned to the Yankee Clipper were named for 19th century clipper ships, clipper Dreadnought was launched in 1853 for the Red Cross Line of New York. The "Deluxe" designation stipulates a more roomy seating capacity of 36 compared to the eight 48 seat standard diners built for the New Haven at the same time by Pullman for use on other trains.

There are only two photos known to me of the Dreadnought as of this post. Below the kitchen side as it appeared in 1949, at the time likely painted in its original livery of Hunter green with the car name below the belt rail. 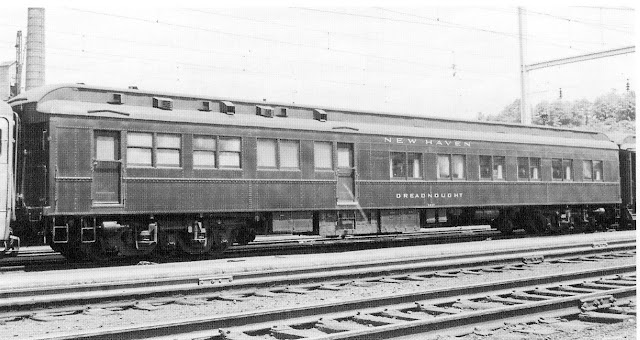 The Dreadnought was listed as a "spare" in the 1952 New Haven passenger train consists book, no longer assigned to the Yankee Clipper having been replaced by one of the new electro-mechanical air conditioned diners of New Haven's all stainless steel fleet of post war cars. The 1952 photo below again of the kitchen side, the diner has been repainted Pullman green and car name has been replaced by only the road number, 5247. 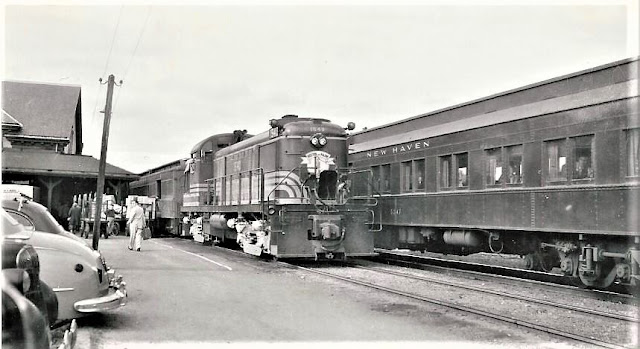 During the era of this layout, diner #5247 was part of the consist of Berkshire trains #144 - #147 as indicated by the excerpt below from the 4/1957 NH passenger train consists book. To complete a prototypical consist for those trains an era correct model of #5247 is a must have.

A model of #5247 was on the verge of being scratch built when I became aware of a kit for this car was going to be released in the future by Bethlehem Car Works. With a call to the company it was revealed the 3D printed sides for this car had already been made and would fit their #40003 Pullman Body with blind ends. Company owner John Greene graciously agreed to sell me the parts available at that time and I would report my experience assembling the car and the details I would add during the assembly.
The photo below are the parts I received minus the #40003 Pullman body that I did receive but did not include in this photo, this is not the complete kit that will be offered in the future and is to be considered only as a pre-production gathering of the essential components.
The roof and ends are nicely cast resin parts and the 3D printed diner sides are very well detailed. This will assemble into a really nice finished model. 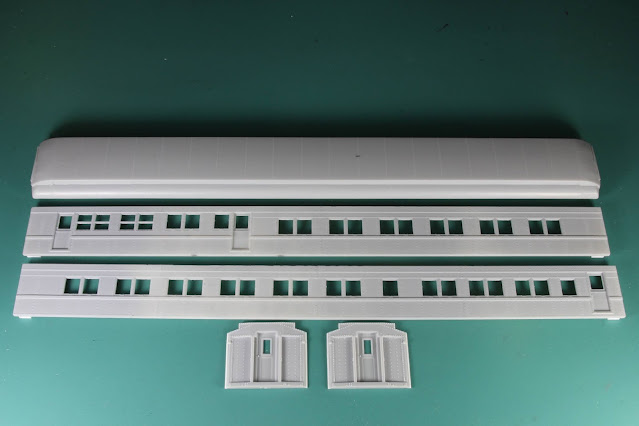 Will start assembly next post.
Posted by Joe Smith at 9:52 AM