The table and seat parts are sourced from the same Rapido stainless steel diner as the trucks and Westinghouse brake components. These tables are nicely detailed with a table cloth and place settings for each seat plus a separate water pitcher that may be glued to the tabletop if desired, all these tables have seating and place settings for four. The NH deluxe diners have a seating capacity of 36, seating for four on one side of the car and seating for two on the kitchen side of the car. Six of the tables and chairs were cut down with a razor saw to seat only two as seen below.

The tables had to be notched to clear the styrene strip glued to the interior of the car side in part 3 allowing the tables to be located as close to the windows as possible. This strip could offer a shelf to hold up one end of a scratch built table if not using the Rapido tables. 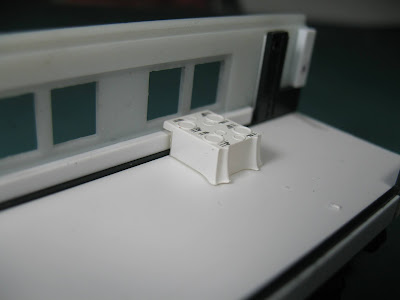 Interior colors
Interior colors for this diner are listed on a New Haven Railroad Historical & Technical Association drawing from the 1970's as light green walls with tan and blue carpets but no indication as to what color the seating was. A query was posted on the NHRHTA forum about the seating color but there was no replies. Remembering an article about the layout of respected master New Haven Modeler Bill Aldrich in a 2001 Model Railroader there is an interior color photo of a diner model he built that shows the seats as dark brown, following Bill's lead the seats were painted a dark brown.

The car sides and ends are painted NH Pullman green and lettered/numbered for the era of the layout to remain consistent with other models on the layout of the same color, Badger Model flex #16-180 was applied.

The roof, undercarriage and trucks are a 50/50 mix of grimy black (dark gray) and black, again remaining consistent with other finished models.

The letter board and number decals are from Microscale #87-884.

The photo below was taken when the sides and roof are temporally snapped onto the chassis to double check the positioning of the tables in relation to the windows before final assembly. Note that in addition to paint and decaling the hand grabs, steps, window glazing with shades and passageway hand rail have all be installed while sides were still a separate part, I believe this method to be easier than after the car body and chassis are assembled together.

The final car body assembly is started by gluing one side to the completed chassis. It is critical to get the sides square at 90 degrees to the chassis first so the remaining ends and roof will fit properly when completing the assembly.
In the photo below the the trucks are removed and the chassis is sitting level on two equal height heads from combination squares on a flat glass surface. The first side is held square in respect to the chassis during gluing by a square sitting on the work surface and against the car side, simultaneously both chassis and side are held flush with each other at one car end against a flat surface.
The second side is glued in place by the same method again using the same car end. Any discrepancy in the length of the chassis in respect to the car sides would be remedied on the opposite car end by adding or subtracting material to/from the chassis, there was none in this case.
The car floor with tables and chairs attached was glued in place next followed by the car ends. With the car sides and ends all assembled square to the chassis, the roof will snap on or off as well as one on a styrene passenger car with a removable roof. 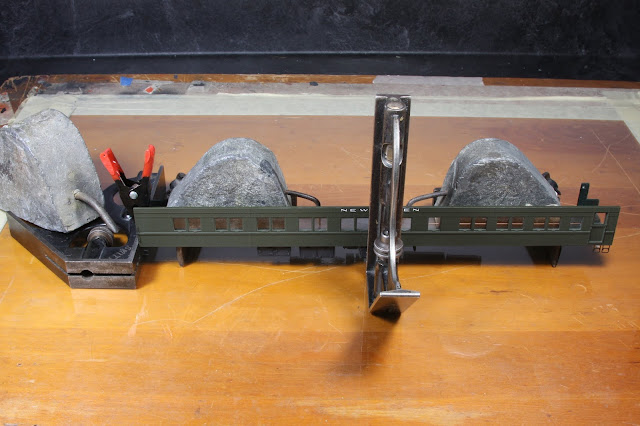 Photos of the completed model
This is the kitchen side. Note that all end details are from Branchline Pullman kits, diaphragms, steam lines, air hoses, coupler lift levers and coupler yokes and may be available from BCW. 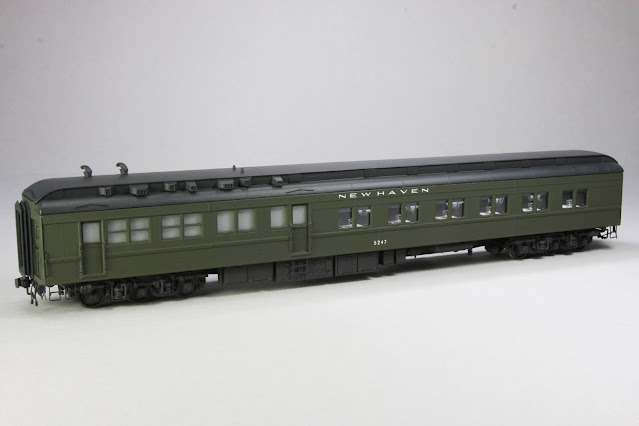 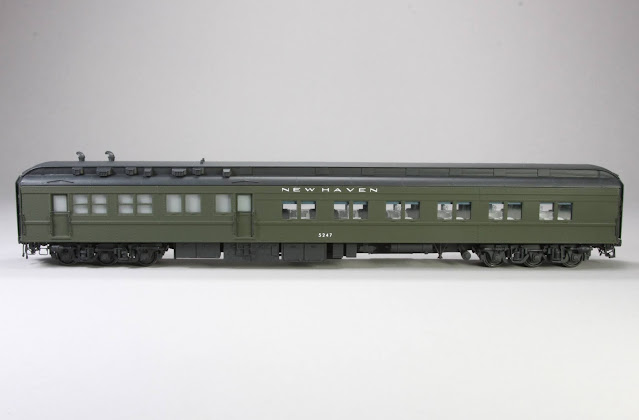 The passageway aisle side. 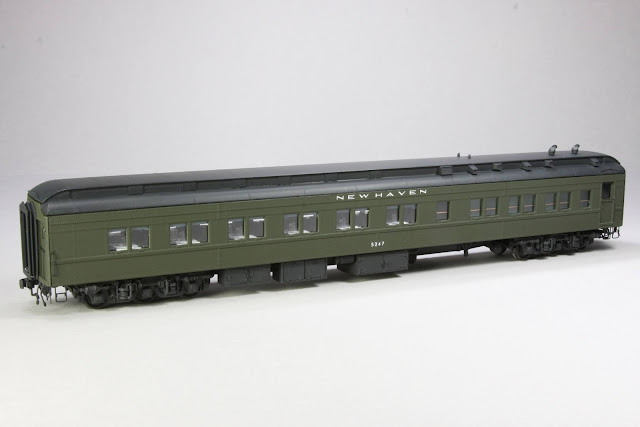 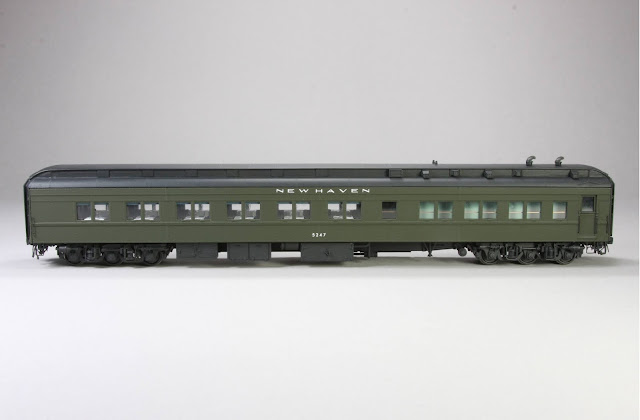 The two heavyweight deluxe 36 seat diners DREADNOUGHT  #5247 and JOHN BERTRAM  #5248 had several decorative and equipment variations during their service life and should appeal to modelers of many different eras of the New Haven Railroad.

This Bethlehem Car Works diner fills a void in the passenger train consists during the era that I model New Haven Berkshire Line. I am very pleased to finally have a model of car #5247 in service on the layout.