The Housatonic Rail Road Company began railroad construction at Bridgeport in 1837 completing the Connecticut portion of the route to the border with Massachusetts during 1842. The Berkshire Railroad of Massachusetts continued this railroad construction northward from the state border with Connecticut reaching the town center of West Stockbridge during 1843.

The Housatonic Rail Road Company leased the Berkshire Railroad in 1844 and constructed 2.25 additional miles from West Stockbridge center to a junction point at the New York/Massachusetts border line with the existing Western Railroad completing the rail route from Bridgeport to Albany in 1845.

The map below shows the original alignment of the Housatonic Rail Road Company in RED and the Western Railroad in BLUE.

The Housatonic Rail Road Company was leased in 1892 by and eventually owned by the New York, New Haven & Hartford Railroad. The Western Railroad would become the Boston & Albany Railroad. 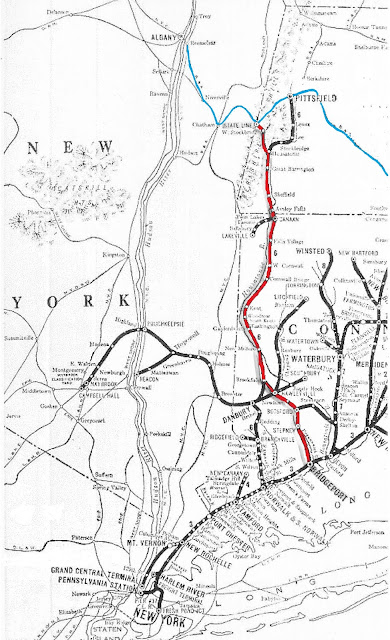 At a point just south of Housatonic Massachusetts the original railroad alignment was joined by a separate northward alignment that was completed to Pittsfield Massachusetts during 1850. The junction point of the two alignments was known as Dalys (later Rising). See map below. 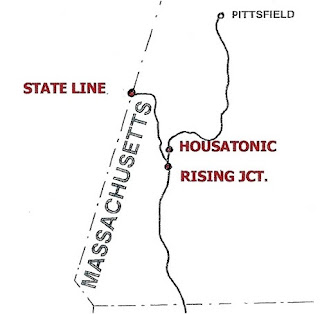 Some time later the alignment to Pittsfield would become the main route and the original State Line interchange yard to Dalys alignment became a 9.66 mile branch line as indicated in a 1930's New Haven employees timetable below. 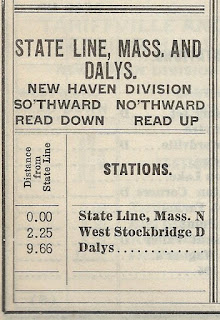 The NH State Line yard in the mid 1950's was still an important freight interchange point between the New Haven RR and the Boston and Albany RR; during August of 1957 the weekly average number of interchanged cars was 364.

Useful information for modeling these operations are gained from the mid 1950's New Haven RR schedule for symbol freight train RI-2 below.

Also, the blocking of cars at Danbury and stations for set off and pickup in route to State Line. 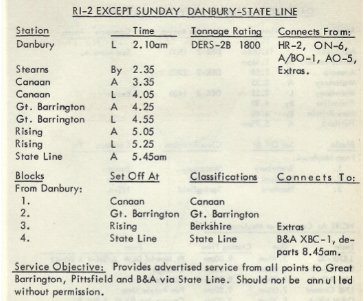 The above schedule also indicates the connecting interchange Boston & Albany train BC-1 a westbound Boston to Collinwood Ohio through freight train with connections at Collinwood for forwarding to Cincinnati, Columbus, Indianapolis, St Louis, Chicago and beyond.

The schedule for symbol train IR-1 below offers the same useful operating information.

The make up of train IR-1 at State Line with interchange traffic from the B&A connecting eastbound train NH-4 from the Selkirk NY yard to North Adams MA. Train NH-4 is not listed in the New York Central Through Freight Schedules like above BC-1, my understanding this train is considered a "traveling switcher listed in superintendent notices" which may be the equivalent of an "extra" on the New Haven.

Again car blocking at State Line and stations in route for set offs and pickups and connecting trains at Danbury. 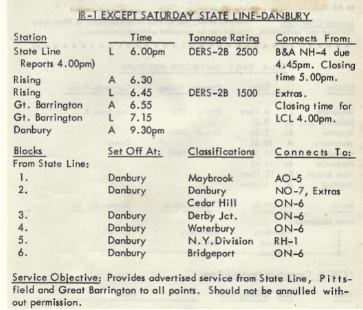 The New Haven RR infrastructure at State Line in the mid 1950's consisted of 4 yard tracks, a caboose track, turntable lead track with ash pit track, 75' turntable & 3 stall engine house, bridge #10.33 over the Flat Brook and a crew bunk house not indicated on the map below. The wood frame station building was Boston & Albany property but believed to be shared with the New Haven in this era. 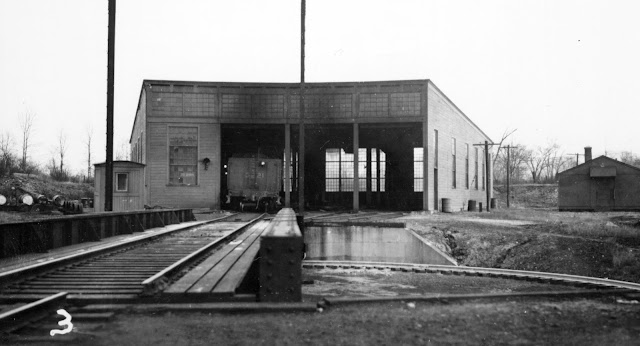 The photo below offers a useful glimpse for modeling of bridge #10.33 over Flat Brook and a look at the roof of the B&A station. Water tank and other structure gone in era of layout. 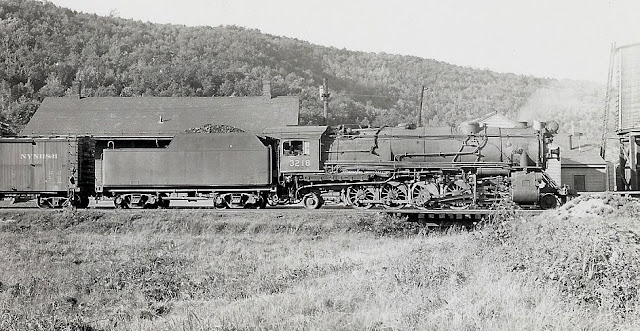 Another partial view of the B&A station building can be seen in the 1950's photo below along with a trio of Alco RS-3's that are the usual power of the era for symbol freight trains RI-2 and IR-1. 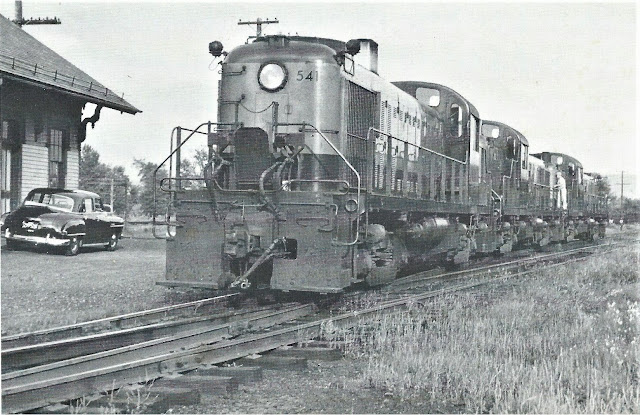 A personal interest with photos like the one above is to try and interpreted what was going on when it was taken in conjunction with known facts then attempt to reenact this moment in time through modeling on the layout. Although unknown for sure, below is my take from this photo.

The shadows appear to be mid day. The absence of cars in the yard behind the RS-3's would indicate that B&A through freight BC-1 has pulled the interchange cars from the NH yard that arrived at 5:45 in the morning on symbol freight train RI-2.

The presence of agent George Ford Sr.'s 52/53 Plymouth sedan at the station indicates he is on duty and would have gone to the B&A interchange tracks earlier in the morning to record the car numbers and seal numbers from the interchange cars that had arrived on the prior days B&A train NH-4. He would have also bled the air from the majority of the cars for switching later when in the NH yard.

The RS-3's will soon pull a caboose from the caboose track (out of picture to the right) and leave it on one of the yard tracks near the station, then go to the B&A yard and pull the interchange cars to the opposite end of the NH yard for blocking to make up train IR-1.

The blocked train would be inspected then pushed back to the station to pin to the caboose. The conductor would get the train orders and clear block from agent Ford and train IR-1 would depart for Danbury at 6:00pm.

Going forward with modeling State Line to any degree of accuracy would be impossible for me without prototype information gleaned from George Ford, Tom Curtin, Bill Chapin, Randy Hammill and the NHRHTA Inc; I thank all.