Flat Brook, aptly named for its generally slow moving and slightly rippled flow as it meanders thru the New Haven/Boston & Albany Railroad properties of the State Line interchange yard.

The only prototype photo on hand that was captured during the era and season of the layout that includes the brook is the below Thomas J. McNamara photo from a 1952 New Haven fan trip to State Line. Although only slightly viewed in the lower right portion of the photo it represents the typical summer flow of the overall brook well and conditions observed personally during a Summer in the early 2000's.

Collection NHRHTA Inc. Reproduced by permission.
A present day satellite image below shows the brook, also the approximate location of the long gone NH yard lead from the B&A in yellow and location in red of the station building seen above. 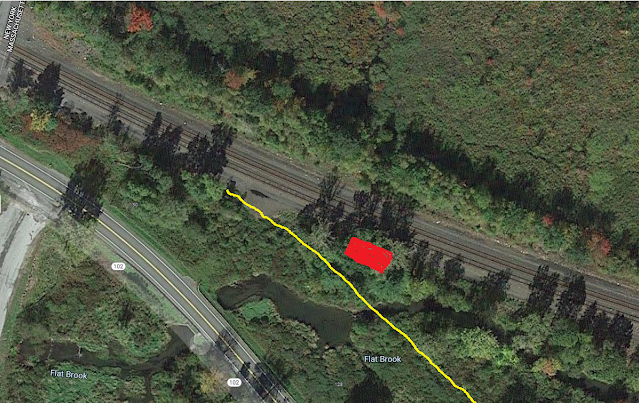 Flat Brook is an essential element to be included in modeling the New Haven yard at State Line.
A portion of the brook near the station building and the NH yard lead bridge over it will be modeled as shown in the drawing below.

Modeling Flat Brook
The code 70 trackage of the State Line interchange yard portion of the layout was completed first and operated on for a check of reliability and operational fidelity to the prototype. Once satisfied with that, the track was removed where the bridge over the brook will be located and the remaining yard track was ballasted.
The brooks natural flow was cut into the plywood and the cut off piece was lowered to form the bed of the brook. Stone bridge abutments and basic land forms carved from foam board insulation glued in place. 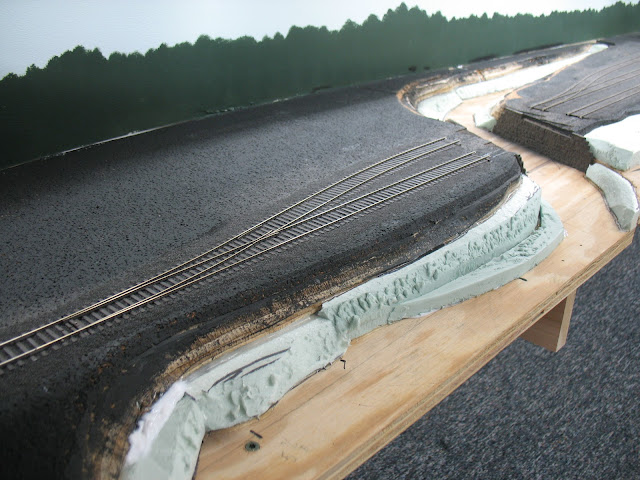 The land forms were completed with Sculptamold. 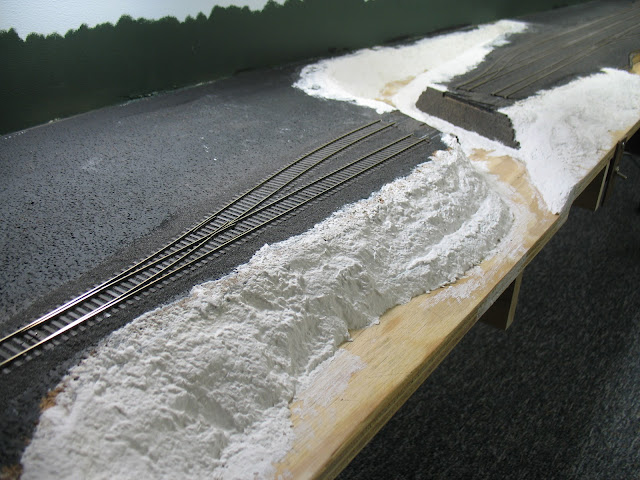 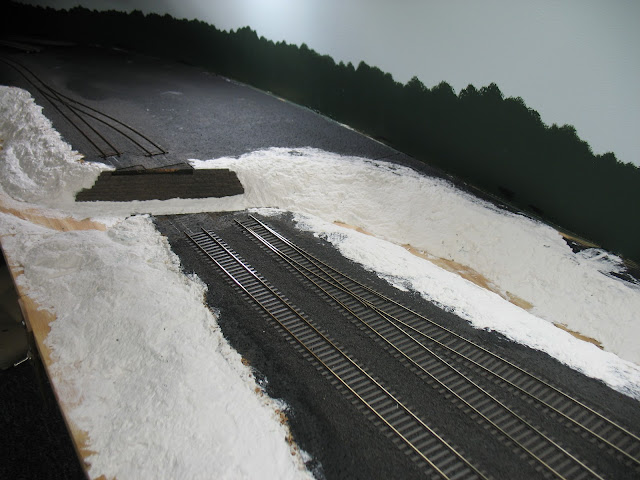 Followed by a heavy coat of gray paint. 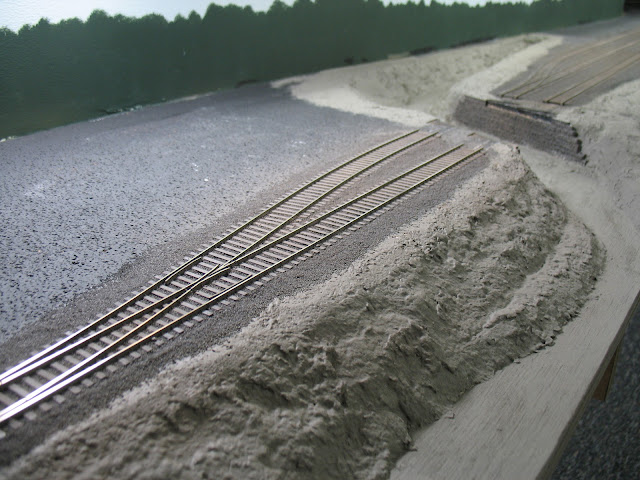 A soupy mixture of Durham's Rock Hard Water Putty sealed the stream bed and banks together. Painters tape along the layout edge was good enough to keep the mixture contained until hardened, tarp below just to be sure. 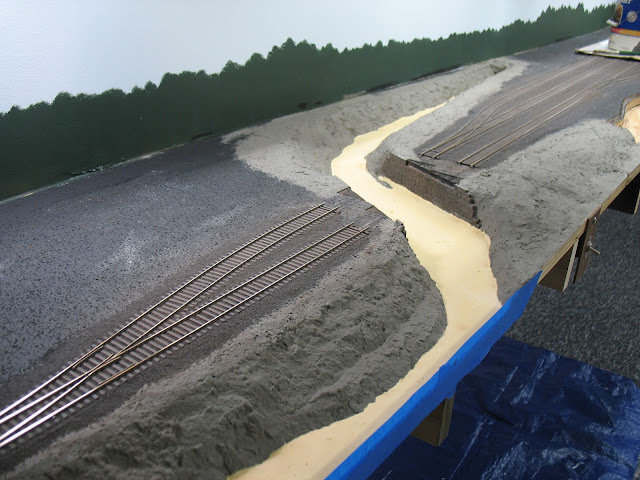 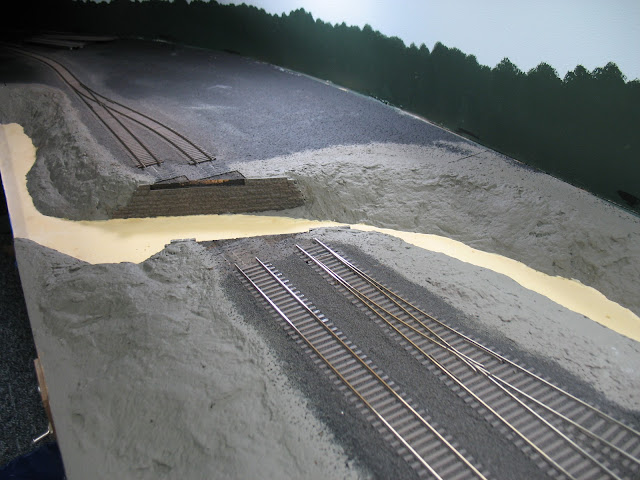 A thinned coat of an earth color cover the banks and a layer of sand in the stream bed secured with Matte Medium. 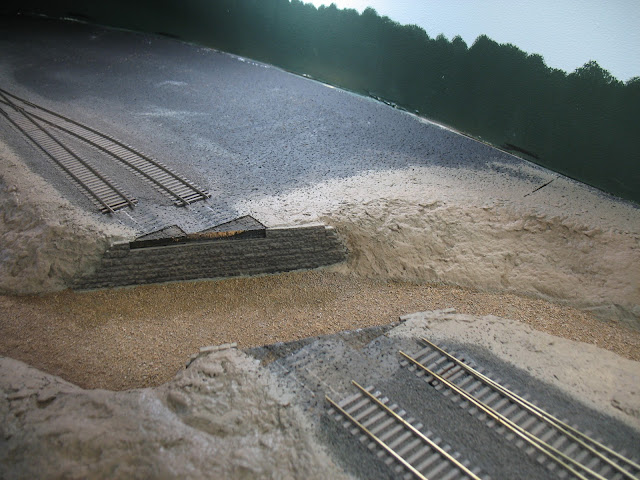 Small rocks are secured to the stream bed and a wash of gray air brushed over the entire bed. The stream banks are covered with basic foliage before pouring the brooks "water". 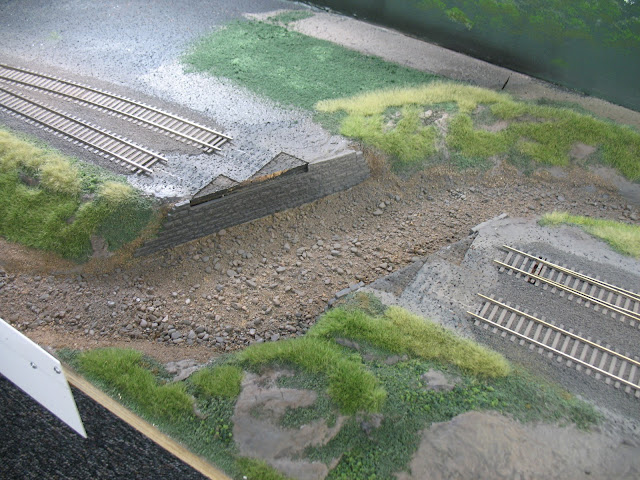 A product named MAGIC WATER will be used to simulate the brooks "water". Styrene sheet secured to the layout edge by screws with a thin layer of sealant between will contain the MAGIC WATER until cured. Again tarp below as a precaution. 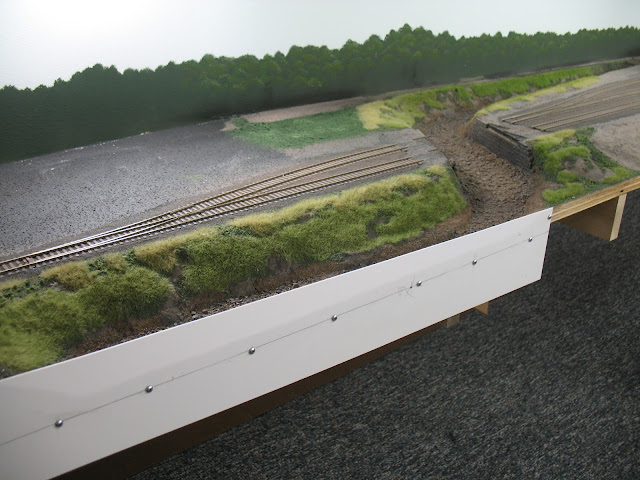 The MAGIC WATER cured overnight to a slight rippled surface that was hoped for. Thankfully, no leaks throughout the curing process! 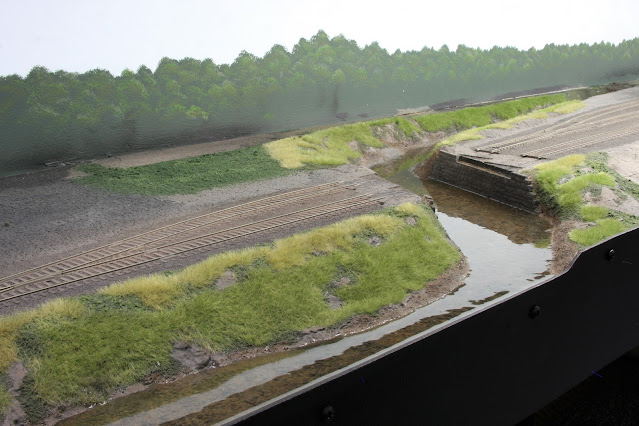 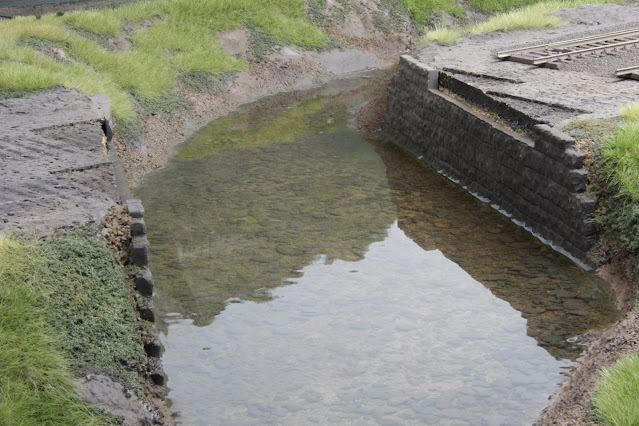