The body/chassis core and assorted parts from a Branchline Pullman kit will be the starting platform for modeling this car, these parts are also available from Bethlehem Car Works.

The Dudley only had a vestibule on one end of the car, removing one vestibule from the core is the first step. Later in the build a replacement car end will be attached where the vestibule was resulting in the correct 74' 6" length over over the body end sills.

The core with one vestibule removed below.

To model the correct window/door plan of the Dudley above, the entire center section with windows between the belt rail, letter board and end sills of the donor sides must be removed and replaced with new windows, filler panels and a baggage door in the prototypical configuration.

The remaining vestibule door was also removed completely separating the top and bottom panels of the sides. The door set aside to be reinstalled after the replacement windows, baggage door and filler panels are permanently in place.

For ease of workability while still a separate piece, the vertical rivet detail and fishplates below the beltline has been removed and sanded smooth.

The best way found with hand tools to assure true and parallel surfaces to mount the replacement windows and filler panels between the separated top letterboard and lower side pieces is to lightly fine file the mounting surfaces until these pieces measure consistently in height within .005" end to end.

Care must be taken not to remove to much material so when reassembled with the replacement parts the side height dimension remains the same as an unmodified kit side.

Again for workability it will be easiest to the cut the opening for the baggage doors while side pieces are still individual parts. 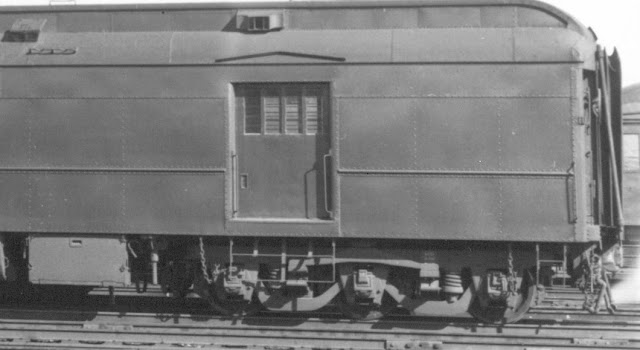 There are several things that are unknown about the prototype because of lack of photo verification, specially after the New Haven café-coach conversion being modeled. One example is the baggage door on what became the kitchen side of the car.

Below is the plan of the once baggage room after the café-coach conversion, the 4' baggage doors originally were directly opposite each other. Sinks and other equipment are now placed flat against the interior wall of the car where the baggage pocket door was on this one side, conjecture would be that this door was removed and a flat exterior panel replaced it but no photo proof has surfaced to date. 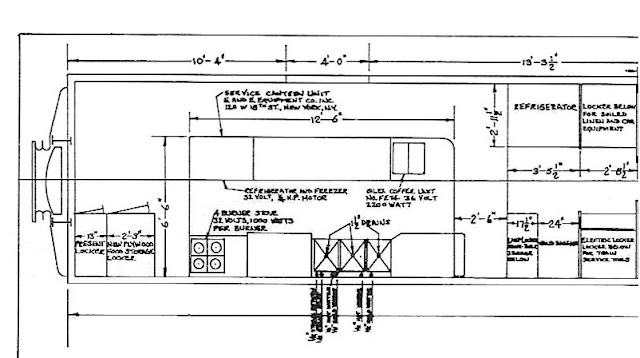 Speculating that the kitchen side door was replaced with a plain panel, one door was modeled as originally built and the other with a flat panel. 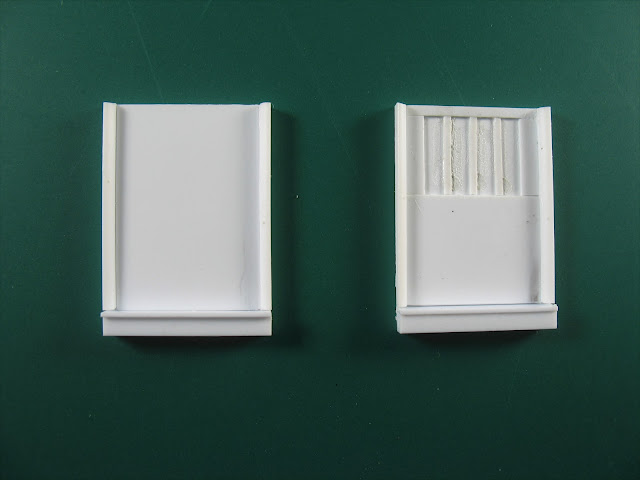 To locate the baggage door an unmodified car side was snapped tightly into the core receiving holes using the side locating pins designed into the kit pointed out below, then the separated side pieces snapped into the opposite side of the core. This will hold the sides and core horizontally parallel for marking the vertical edges of the door.
The prototype dimension of 10' 4" from the car end to the door edge closest to the end was marked on the lower side piece, from that point the actual width of the modeled door was added and a second mark made on the lower side piece outlining the material to be removed. These measurements were vertically projected to the top side piece with a machinists square. The actual height of the modeled door was marked on top piece between the vertical measurements.
After separating the side pieces from the core removing the material on the bottom piece is a simple scribe and snap procedure. The top is more tedious, the top edge of the door was deeply scribed and verticals lines completely cut thru to the top line before snapping off at the top line. 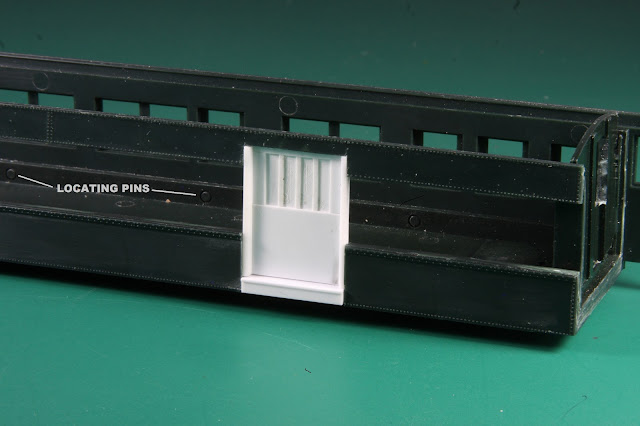 Before installing the replacement windows and filler panels a way to locate a consistent inset depth of these these parts in relation to the outside surface of the car side is necessary.

A quick temporary jig to achieve this step utilized an aluminum block on hand and some styrene pieces. To function this jig will need to be sandwiched tightly between both cars sides while they are snapped in place onto the core as mentioned before.

To widen the aluminum block being used to a total measurement equal to the exact inside width between the kits car sides, two appropriate sized styrene pieces were glued in place to the side opposite the work surface. A third styrene piece to set the proper inset depth of the replacement parts was glued to the work surface of the block. 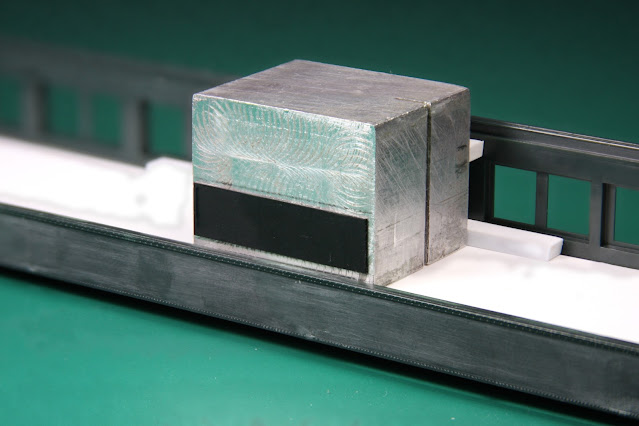 A styrene floor that will be installed later in the build serves as a temporary surface for the jig to slide back and forth the length of the car as the new windows and filler panels are installed one by one simultaneously pushing them and the car sides firmly against the jig while gluing. That will be the next step in the build. 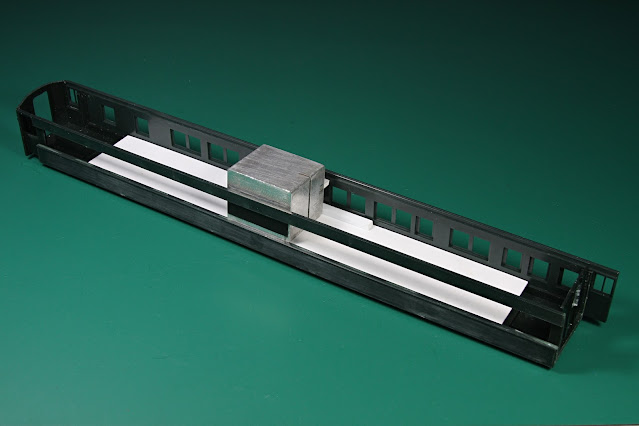